Our mission is to bring Bells together in the spirit of family unity and friendship, and provide information on Bell heritage, genealogy and history.

Join Us - Apply for Membership

Members of Clan Bell get discounts, our newsletter and other benefits.

We can be proud of the important inventions and advances made by Bells in many fields including telephones, harvesters, steam ships, aviation, forensic science, and more. The modern world owes a lot to the clever and industrious Bell clan.

Scottish festivals are fun events for family, with information on genealogy and heritage, competitions for pipe bands, highland dance, heavy athletics, and fun pageantry. Find events near you and clear your calendar for fun, fellowship, and family. Many festivals have a Clan Bell tent where you can meet other Bells, get information on your heritage, or just rest and relax for a while.

If you have Bell heritage, and you are not a member of Clan Bell North America yet, what are you waiting for?

Clan Bell is an Amazing Family

Clan Bell North America (CBNA) is the organization formed from a line of Bell family organizations starting in the 1970s to the present, and CBNA is recognized by the IRS as a 501c3 organization.

Clan Bell has been a driving force in the history that makes Scotland so fascinating. Starting as knights in Northern France, the Bells fought in the Norman conquest, in the Crusades, and more. Bells have been Knights Templar, master masons for beautiful castles in Scotland, and fought for Scottish independence. Fighting to survive on the Scottish Border as reivers, Bells were known as one of the Devil's Dozen, the 13 strongest and most active of the riding clans. Bells thrived under hardship, so much that Scots needed the proverb: "numerous as the Bells of Middlebie." A Bell carried Kinmont Willie of the Armstrong clan over his shoulders during the battle to free him during the raid of Carlisle Castle. The Bells from Scotland and from England were lined up across from each other at the Battle of Solway Moss, and refused to fight their cousins. England and Scotland gave a war, but Bells turned it into a family reunion.

Bells have been inventors and thought leaders in many professions, invented the telephone, mechanical reaper, pioneered steamships, and advanced knowledge in medicine, forensic science, and the law. Bell entrepreneurs created companies that advanced aviation with helicopters and the first supersonic jet, and of course the "Scottish" food of Taco Bell. A Bell was founding co-publisher of Encyclopedia Britannica. A Bell founded Bell's Whisky - which is a best-selling scotch in Scotland, the UK and South Africa. A Bell was the author of "The Principles of the Laws of Scotland" that taught law to generations of lawyers.

When England and Scotland united into the United Kingdom, a first priority was to send the most unruly of the unruly Bell clan to Northern Ireland in order to help pacify the Scottish border. Many Bells migrated to Northern Ireland, the United States, Australia, Canada and other nations. The story of Bells is still being written by our families bound together by friendship, fellowship, and a rich and proud history.

Please join Clan Bell North America to help us celebrate the heritage of our great family at Scottish Highland games and events near you, to learn more about your genealogy, and help us unite Bells world wide. Our online membership application is easy to use and helps us connect our larger Bell family.

There may be a Clan Bell tent at a Scottish festival near you. Come see the pipe bands, highland dance competitions, and see the heavy athletic competitions like the caber toss. Learn more ...

There is a lot of fun at the Scottish festivals. Come see friends and family to learn more about your heritage. Clan Bell needs volunteers to serve as staff in our tents at Scottish games.

Clan Bell - North America has been approved by the IRS as a 501(c)(3) tax exempt non-profit organization. Membership dues and gifts to CBNA are now tax deductible on your federal taxes. Officers and commissioners doing the work of CBNA may also be able to deduct certain expenses. As always, please consult with your local tax professional to see how this change can best benefit you. Learn more ... 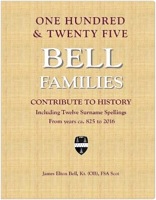 The new book One Hundred & Twenty Five Bell Families Contribute To History by James Elton Bell is an important work on the history of Bells through history and an important resource for your family genealogy. It shows that the famous Bell inventors are just a small part of what Bells have contributed to history.
The Clan Bell Store has new items that also make great gifts, including a Clan Bell reiver lapel pin, Clan Bell Reiver T-shirts in light blue and black (sizes L, XL, 2XL, 3XL), and more of the Clan Bell Badge lapel pins. 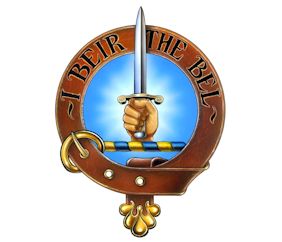 The Court of The Lord Lyon Clarifies Sept and Clan Issues

The Lyon Court answers the question of "who is a member of a clan?" with the statement:

"Every person who has the same surname as the chief is deemed to be a member of the clan."

This means that if you or an ancestor has the last name Bell or one or the various spellings of Bell, you are deemed by the Lyon Court to be a member of Clan Bell. Some confusion has been created by a few clans who claim many family names as "septs" of their clan. The Lyon Court clears up the issues on septs by stating:


"There is no official list of recognised septs. This is a matter for each chief to determine. But where a particular sept has traditionally been associated with a particular clan it would not be appropriate for that name to be treated by another clan chief as one of its septs."

Lists of septs include whatever families a clan chief wants to add, so the Lyon Court found it necessary to point out that it is not appropriate for clan chiefs to claim septs that were already a sept to another clan.
Even though Clan Bell is recognized as a clan by the Lyon Court and has a long history as an independent clan, some other clans try to claim Bell as a sept of their clan.
Sir Crispin Agnew of Lochnaw Bt., an officer of the Lyon Court, noted that

"It should also be said that the various Sept lists, which are published in the various Clans and Tartan books, have no official authority. They merely represent some person's, (usually in the Victorian eras) views of which name groups were in a particular clan's territory."

Do not let others' claims and confusion keep you from your rich heritage as a member of Clan Bell.

Kilts in Bell of the Borders Acrylic Tartan

Show your pride in being part of Clan Bell with this attractive kilt. For only $69 each, or $89 with a one year membership in Clan Bell North America, it is affordable to have the entire family in these attractive kilts. Learn more ...

This colorful lapel pin is 1 inch in soft enamel, and makes a great accent to any suit or dress lapel. Learn more ...

Help preserve our heritage, and have fun and fellowship.
It is easy to pay online and complete the fillable PDF form.

We have materials to share at tents, and you can enjoy meeting Bells, and hang out with friends.

It is easy to update your email and mailing address online.

Wanted: Do You Descend from John Bell?